So you moved to Panama City, and specifically to the beautiful and central district of El Cangrejo. The next step: find out how to move around the city. Although it seems that every Panamanian man drives a car even to travel a distance of half a block, try to be different and do not buy a car. Use the aggressive driving style of Panamanians as an excuse or you are simply not interested in having one at this time. Well, in the end the decision is yours, so we will present you various transport options so that you can choose the best one for you. 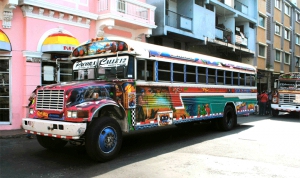 Take a UBER
The internationally recognized travel application already exists in Panama and seems to be improving daily. At any time of the day or night you will find at least a handful of Uber drivers hanging around the streets, able to pick you up in a matter of minutes. Safe, convenient and accessible, Uber's transparent rates provide clarity to what was played by luck with the taxi driver that touched you, and hop up with the hope of not being scammed. Also, with the introduction of Uber in English, you do not even have to worry about a possible language barrier with your driver. Uber makes it easy, picking you up wherever you are. However, you may want to get a local phone number, in case the driver tries to call to clarify the pickup location. Typically, a Uber trip within the city will cost between $ 3-5. 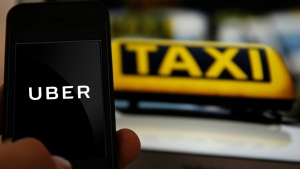 Take a Yellow Taxi
Are you looking to be an adventurer and travel in a taxi? First, you have to be careful since taxi drivers may not have insurance, car papers, or it may not even be their car. In addition, the disproportionate increase in prices is common if you look foreign and do not speak Spanish. Few taxi drivers speak English. It is best to pre-negotiate the price before getting into the taxi. With thousands of taxis in the city this becomes a quick option if your phone is dead and you have a couple of dollars in cash in your pocket. If you're lucky you'll only pay $ 2 for a race within the city, but be prepared to pay a lot more, like $ 5-10. 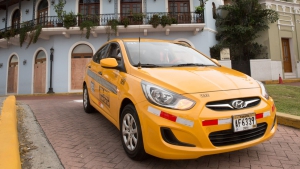 Take a CABIFY
The last shared-travel application to reach the market, Cabify is the Panamanian version of Uber. Technically it exists throughout Latin America and Europe and is considered more the Spanish Uber than anything. The big difference here is that Cabify charges per kilometer of the calculated route, regardless of the actual route taken by the driver. On the contrary, Uber charges according to the minutes on the route and kilometers traveled so you can experience a price difference in your favor compared to Uber.

Rent a Car
Do not you want someone else to drive you? Renting a car is easy in Panama and in El Cangrejo there are at least 10 car rental agencies. Take into account that the traffic is usually horrible during the weekdays from 7 to 9:30 am, around 12 noon, and from 4 to 7 pm. If you want to get somewhere fast, then do not drive because not only is the traffic terrible, but the numerous holes that punctuate the streets will definitely slow you down. In addition, you will find that car rental companies do not usually include insurance in their price list so you would have to pay an additional $ 50-100 per day over the listed price.


Take the METROBUS
Join the thousands of Panamanians who use the bus every day to travel. Operating under a star route system, all buses depart from the Albrook Terminal and go to their final destination along unique routes. Then they return, usually by the same route, back to the terminal. Therefore, if your goal is to really mobilize using the Metrobus, you first need to learn the routes and final destination of each bus so as not to end up at the other end of the city. One of the best routes to get around the city is the bus that says: Panama Viejo- Via Israel- Seafood. It stops at key locations such as Multiplaza, Multicentro, Balboa Avenue, San Francisco, the Seafood Market, Panama Viejo, and Atlapa. There are a lot of buses for this route so you should not have to wait more than 10 minutes to get on one. You can take the bus at any of the stops on Via Israel, and Avenida Balboa (which basically makes a circle on these main streets).

The Metrobuses are quite comfortable, with air conditioning and fairly clean interiors. The cost of using the Metrobus is only $ 0.25 for any one-way trip regardless of whether you are going to get off on the road or if you go to the end of the route. If you board a bus that uses one of the toll highways, then the fare increases to $ 1.25 - take this into account for the South Corridor and North Corridor. If you take the bus to the airport, then you will save a lot, paying $ 1.25 instead of approximately $ 30 in Uber or taxi. To ride the Metrobus you will need a MetroCard that costs $ 2.00 and can be purchased at supermarkets such as Super 99 and El Rey or at the transport terminal.

Get on the Metro
Operating in Panama since 2014, the new metro is very clean, reliable and easy to use. Currently there is only one line, so do not worry about having to try to navigate a complicated subway system. Each trip costs only $ 0.35 and you will need a MetroCard as mentioned above for buses, which also works on the Metro. In El Cangrejo there are 2 metro stops - one in Vía Brasil and the other in La Iglesia del Carmen. The subway will take you to Casco Viejo and return you to the Albrook terminal. In the other direction, the subway takes you out of the city. Line 2 of the Metro is under construction and will go to the airport. We hope this line is open in the next year or two.

Ride Bike in the City
If you are willing to take your life in your own hands, then feel free to navigate the winding, congested and hollow roads of Panama. Drivers do not respect cyclists, so the use of a bicycle as a daily mode of transport is neither ideal nor recommended. However, on Sundays, the government closes the Cinta Costera so that cyclists can travel safely from Panama Viejo to Casco Viejo. Do not have a bike yet? In El Cangrejo you can visit the MTB Store just off the Vía Argentina. They specialize in mountain bikes, which could be a good idea given the situation of the holes in the streets.

WHAT IS THE SUMMARY? From areas like El Cangrejo it is easy to take any of the mentioned modes of transport, but we recommend avoiding taking a car through Argentina in the afternoon because the congestion tends to be so much that you could be stuck there for more than an hour, without moving Absolutely. Being close to the two metro stations you can easily walk to these or call an Uber. Good luck and navigate safely through the busy streets of Panama!
Written by: PANAMA LOCAL EXPERT
PUBLISHED: Oct 7th 2018 | UPDATED: Aug 19th 2020