Get ready to party like you've never partied before!

“Get ready to party like you’ve never partied before!” that’s what I was told as we got into the car that dark early morning. It was Saturday 2nd February at 5am and we were heading to a small town called Las Tablas in Los Santos Province of Panama. I am from Scotland and my friend from Germany was joining us for the carnival experience, along with one local and very experienced Carnival expert.

The drive was relatively fast as we zipped along the highway chasing the sunrise. When we arrived in Las Tablas you could already feel the atmosphere, not quite a party atmosphere yet, but definitely the morning after a great party. We found the house where we were staying, true Panamanian style, sharing with 17 more strangers; we set up our army style beds and headed out to the town center. Of course, the essential was generously applying waterproof sunblock and ensuring money was in a watertight container, leaving all other valuables locked in the car.

Now we had been warned…I mean prepped for what was coming but I think nothing could have prepared me for what Carnivals in Las Tablas was.

In the town square there is huge water trucks known as “Cisternas” parked all around the square on both sides of the street. They are there to keep you cool and keep you wet…very wet! This activity is call “Culecos”. Different companies sponsor all the cisternas for the culecos and not only throw out gallons of water…expect t-shirts, water bottles, bandanas and free samples to fly your way.

With loud music booming from different radio and TV stations set up on scaffolds in the center of the square, the party really began. Many people gather in hordes with their coolers full of the day’s supply, which also marks their territory. We on the other hand just bought our beers, sodas and other drinks from various vendors around the town. 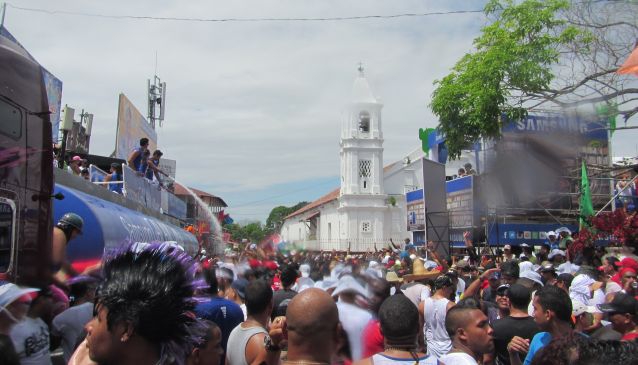 So here we are, in the town center of Las Tablas with a regular population of around 8,000 people was now filled with at least 20,000 people all in one little square. Dancing on the street with gallons of water been shot at us, and then comes the parade! WOW the parade, led by a “murga” on a trailer/float, which is a typical Panamanian brass band, then comes the two floats of each carnival queen. Calle Arriba and Calle Abajo, literally meaning High Street and Low Street, each ‘sponsor’ a queen. All year they do fundraisers collecting money for carnivals, where the competition is on. With two parades per day, over the four-day celebration you can imagine the work that goes into the event. The floats are completely breathtaking with colors, beautiful girls and of course the Queen dressed in stunning clothes, dancing the typical side-to-side wave dance. When this happens though…the streets are not cleared, so all the people who were on the street, still are, crowded around these beautiful floats. One of the floats I saw had fire-breathing dragons, it is incredible that there are no injuries. 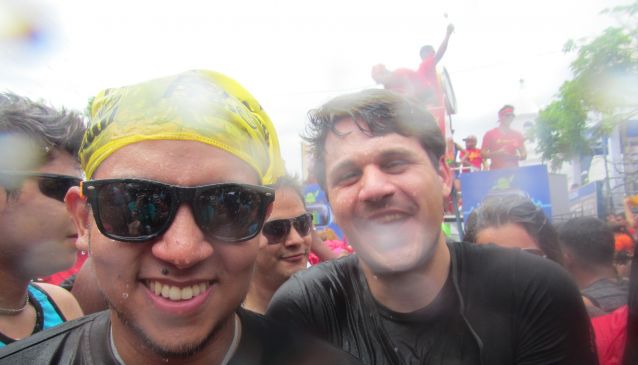 After a day of fun, music, water and crowds we headed back to our shared house to catch a short nap before the night party began. The park usually closes at 3pm and the town becomes remarkably quiet again as the Culecos finishes and people begin to prepare the streets for night.
The second parade of the day is around 9-10pm, which is accompanied as before with a murga, this time though you can expect a lot of fireworks. Each Queen is trying to out-do the other, therefore everything is very over the top and amazing to see. Now, the parade is not the only fun to be had in the night. Everyone heads to a party in either the PH or the X-Zone. We had VIP tickets to the PH, which included a t-shirt, water bottle and a bottle of the local spirit Seco. The PH can only be described as a HUGE outdoor nightclub, with stage, bars and second level on scaffolding for the VIP ticket holders. The first night we headed up to the VIP section and enjoyed dancing and drinking to the mix of music, they play everything from reggaeton to house music. 3am rolled around and by then we are all exhausted…we walk home, crawl into our army beds and sleep until sunlight.
When the morning comes, its time to do it all over again! Sounds great right? It was, but for my first carnival experience, two days and two nights was enough. On bright and early Monday morning we headed back to the city, via the beach for well-deserved rest and recuperation. 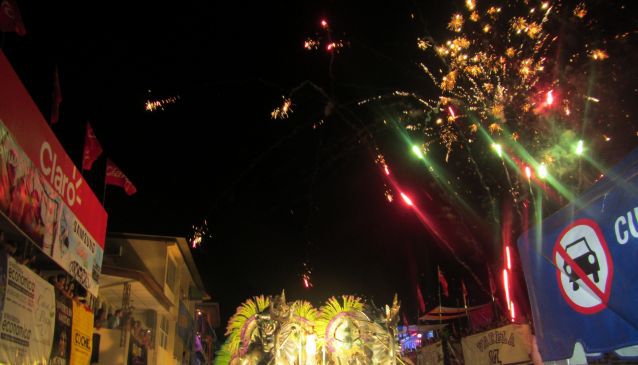